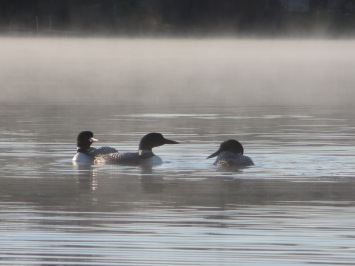 Using simulated territorial intrusions, I found that loons with previous success actually showed less territorial behavior in the weeks before breeding, but increased territorial behavior just before they were set to lay the first egg of the season. Unsuccessful loons, by contrast, responded with more territorial behavior regardless of the time of season. Because successful birds have to contend with more intruders, it’s possible that they develop a strategy to produce costly defensive behaviors only when absolutely necessary. Our findings are published in the Journal of Avian Biology. Walter has also written more eloquently about our findings on the loon project blog (the blog, by the way, is definitely worth following!).